The exception that is thrown for errors in an arithmetic, casting, or conversion operation.

We haven't written anything about avoiding this exception yet. Got a good tip on how to avoid throwing System.OutOfMemoryException? Feel free to reach out through the support widget in the lower right corner with your suggestions. 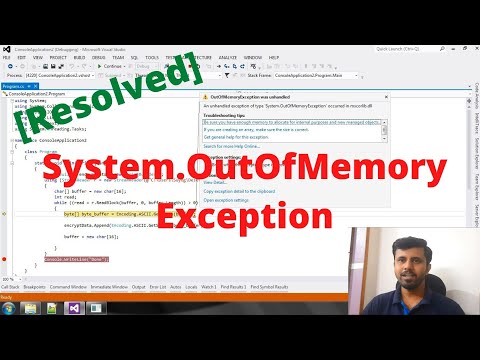 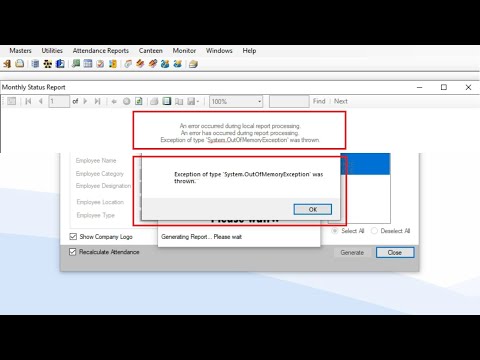 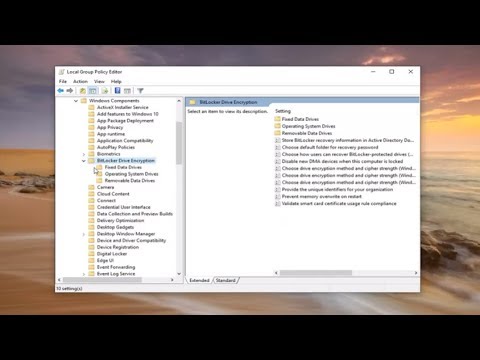 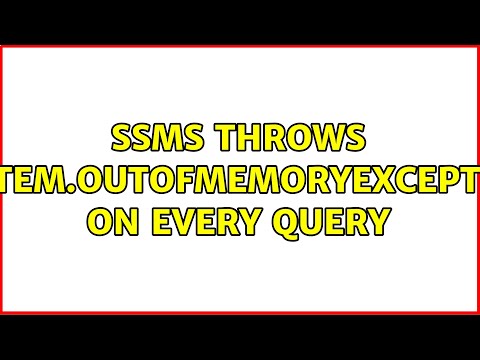 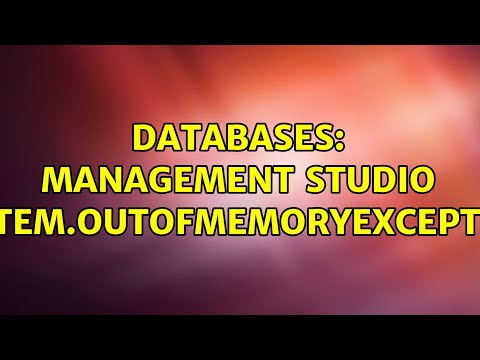 You may want to read this: "“Out Of Memory” Does Not Refer to Physical Memory" by Eric Lippert.

In short, and very simplified, "Out of memory" does not really mean that the amount of available memory is too small. The most common reason is that within the current address space, there is no contiguous portion of memory that is large enough to serve the wanted allocation. If you have 100 blocks, each 4 MB large, that is not going to help you when you need one 5 MB block.

Each character requires 2 bytes (as a char in .NET is a UTF-16 code unit). So by the time you've reached 800 million characters, that's 1.6GB of contiguous memory required1. Now when the StringBuilder needs to resize itself, it has to create another array of the new size (which I believe tries to double the capacity) - which means trying to allocate a 3.2GB array.

I believe that the CLR (even on 64-bit systems) can't allocate a single object of more than 2GB in size. (That certainly used to be the case.) My guess is that your StringBuilder is trying to double in size, and blowing that limit. You may be able to get a little higher by constructing the StringBuilder with a specific capacity - a capacity of around a billion may be feasible.

In the normal course of things this isn't a problem, of course - even strings requiring hundreds of megs are rare.

1 I believe the implementation of StringBuilder actually changed in .NET 4 to use fragments in some situations - but I don't know the details. So it may not always need contiguous memory while still in builder form... but it would if you ever called ToString.

Check that you are building a 64-bit process, and not a 32-bit one, which is the default compilation mode of Visual Studio. To do this, right click on your project, Properties -> Build -> platform target : x64. As any 32-bit process, Visual Studio applications compiled in 32-bit have a virtual memory limit of 2GB.

64-bit processes do not have this limitation, as they use 64-bit pointers, so their theoretical maximum address space (the size of their virtual memory) is 16 exabytes (2^64). In reality, Windows x64 limits the virtual memory of processes to 8TB. The solution to the memory limit problem is then to compile in 64-bit.

First, I would like to mention that what we are discussing here is not real permutations, but so called n-tuples or permutations with repetition - Wikipedia.

Second, regarding the System.OutOfMemoryException when generating permutations, I think we all agree that the result should not be stored in a list, but provided as enumerable which will allow applying filtering and consuming (eventually storing) only the ones in interest.

In that regard the LINQ solution provided by @juharr is performing very well. So my goals are to minimize the intermediary memory allocations, including string concatenations and also to end up with a more general and faster solution.

In order to do that, I need to take some hard design decision. The signature of the general function I'm talking about will look like this

and the question is what should be the array yielded. If we follow the recomendations, they should be a separate array instances. However, remember I want to minimize allocations, I've decided to break that rules and yield one and the same array instance, moving the responsibility of not modifying it and cloning it if necessary to the caller. For instance, this allows the caller to perform no cost filtering. Or implement the OP function on top on it like this

A few words about the algorithm. Instead of looking at the problem recursively as some other answerers, I want to effectively implement the equivalent of something like this

Interestingly, I recently answered a combinations related question and realized that the algorithms are pretty much the same.

With all that being said, here is the function:

I've did some tests by simply calling the different functions with N=2,3,..6 and simply iterating and counting. Here are the results on my machine:

As we can see, memory wise both string functions are comparable. Performance wise the LINQ function is only ~2 times slower, which is pretty good result.

As expected in such scenario, the non allocating function significantly outperforms them both.

UPDATE: As requested in the comments, here is the sample usage of the above functions (note that they are extension methods and must be placed in a static class of your choice):

However, remember the design choice I've made, so if you expand the charPermutations inside the debugger, you'll see one and the same values (the last permutation). Consuming the whole result of the above call for char[] should be like this

Actually a good addition to the two methods presented would be the following extension method:

so the consuming call would be simple

You don't have a continuous block of memory in order to allocate 762MB, your memory is fragmented and the allocator cannot find a big enough hole to allocate the needed memory.